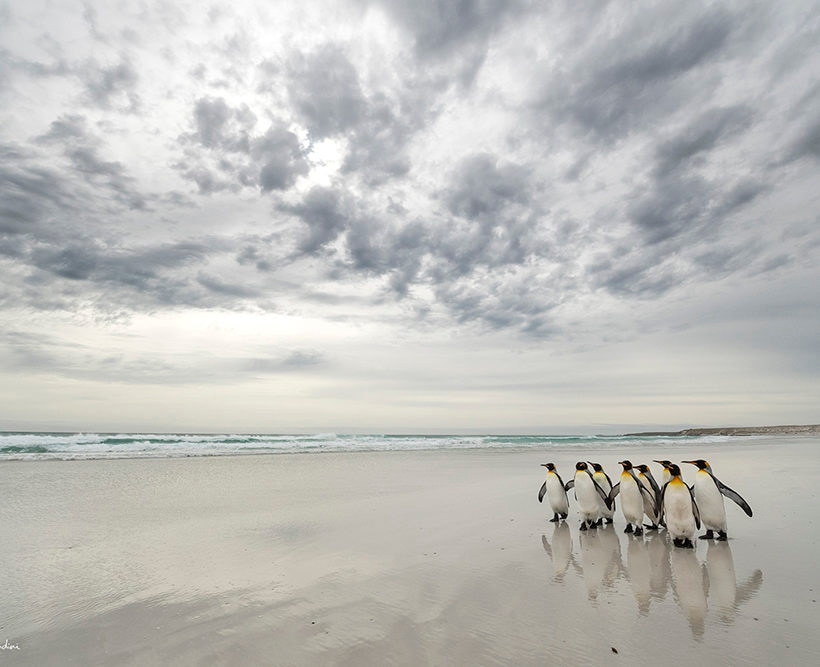 ©Daisy Gilardini. - King penguin on the beach
©Daisy Gilardini.
©Daisy Gilardini.
©James Whitlow Delano. - Fish laid out by artisanal fishermen to dry north of Pondicherry. Fish hauls, however, have decreased due to overfishing. Conservation India conducted a study in 2010 85% of all artisanal fishermen surveyed had experienced diclines in fish catch. Meanwhile most trawler fishermen admitted to not obeying laws which prevent them from fishing within 3 nautical miles (5.6 km) of shore putting them in direct competition with artisanal fishermen. Pondicherry, India.
©Georgina Goodwin. - Amina Suleiman Gas, 45 stands amidst the carcasses of her dead animals, piled for burning outside the compound where she has lived for 10 years in Barwako village 20kms into the desert from Anaibo Town, central Somaliland. Last week she lost 18 of her animals, now she is left with 12. She sent most of her livestock west with her neighbor in November 2016 when the drought began to get worse and fears they have not survived. Barwako was a village of 100 families but 245 more have come in from the surrounding area because of the drought. Amina is a member of the Villlage Savings and Loans Association (VSLA) who have shared all their savings with the displaced families, now they have nothing left. "We shared everything with them," Amina says. At least 6.2 million people, more than half the population, need assistance after 4 consecutive seasons of failed rains over 3 years have left the region depleted of all its resources and experiencing a drought on a scale not seen since 1974. It is on the verge of famine. CARE International has helped over 300,000 people since the drought situation became critical in October 2016, 200,000 of which have received water assistance.
©J.B. Russell. - Photo by @jbrussell for @everydayclimatechange Following days of heavy rain, the water level in the Seine River reached 6.2 meters and the river breached its banks in Paris and elsewhere in France. The Louvre and the Musée d'Orsay are temporarily closed and circulation and transport have been disrupted. While the water levels have not reached those of the great 1910 flood, they have equaled or surpassed the record floods of 1982 and 2001. However, those earlier floods occurred during the winter months when heavy precipitation is expected. This record flood is taking place in early June when trees and vegetation retain a great deal of rainfall. Global warming and climate change are creating extreme weather phenomena that are occuring with increasing frequency across the globe. #climatechangeisreal #paris #france #seine #flood #flooding #rain #globalwarming #climatechange
©Matilde Gattoni. - Ghana - Fuveme - As the tide rises the village of Fuveme quickly gets flooded. Nestled between the ocean and the Volta river estuary, the village of Fuvemeh has seen its territory reduced from several kilometers to few hundred meters. Nowadays, the villages sits on a narrow strip of land which separates the coastline from the adjacent lagoon. Haunted by coastal erosion, its 1,000 inhabitants have literally nowhere to move.
©Matilde Gattoni. - Ghana - Kpogbor - The last man living on the island that has gradually been destroyed by the rising sea level and coastal erosion stands in front of the ocean where he has built a makeshift sea defence wall in order to protect what is left of his house.
#Agenda